Connected devices that help friends focus without getting distracted
Project Overview
This project explored the space of productivity between friends. The premise of the product is that when friends study/work together, it helps them stay focused through shared accountability and social proof concepts. The product allows friends to still have the sentiment of "working together" even if they are physically apart and helps them stay mindful of distractions.
Project Details
Role: Designer
Team: 4 students
Duration: 3 weeks

Skills: Particle.io, prototyping interactive objects, physical computing, functional specifications, designing connected products
Go to Final demo
My Role
As one of the designers on the team, I was heavily involved in conceptualizing and refining the product. I researched existing IoT products that successfully used ambient, glanceable, and non-intrusive technology as inspiration. I played a role in development and prototyping as well as delivering the final pitch/presentation. 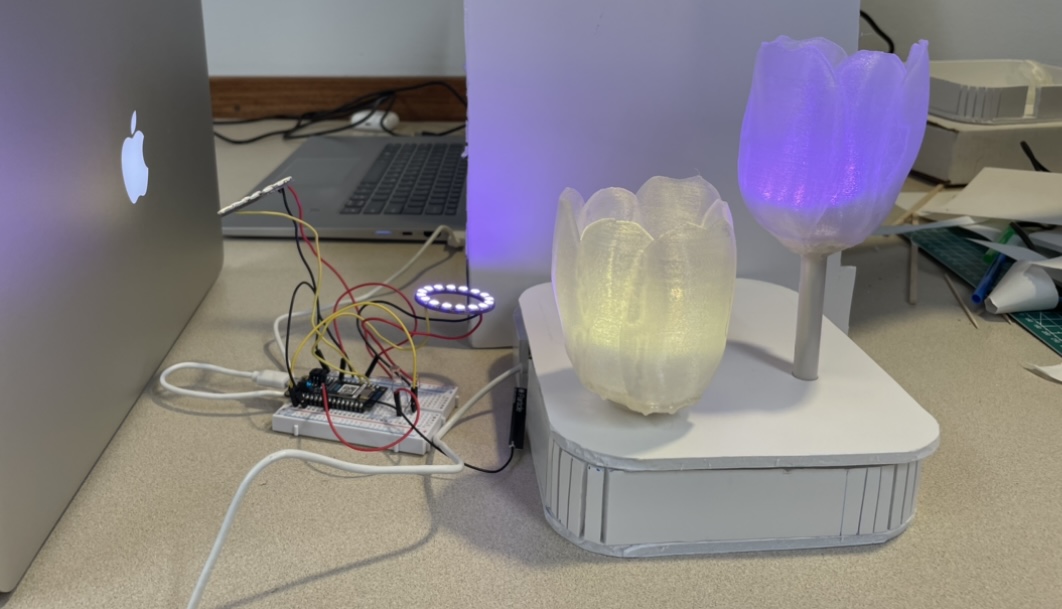 Conceptual Design
This concept is a paired device that is used between two friends to motivate them to stay focused and be more mindful of distractions. Each device has two flowers — one representing the device's owner, the other one representing their friend.

When the owner is ready to begin working, they turn on focus mode and their respective flower will light up on their device and their friend's device. The owner must place their phone on the base of the device. If the owner picks up their phone - an indication of being distracted - the flower will show a breathing light to non-intrusively remind them they are being distracted. 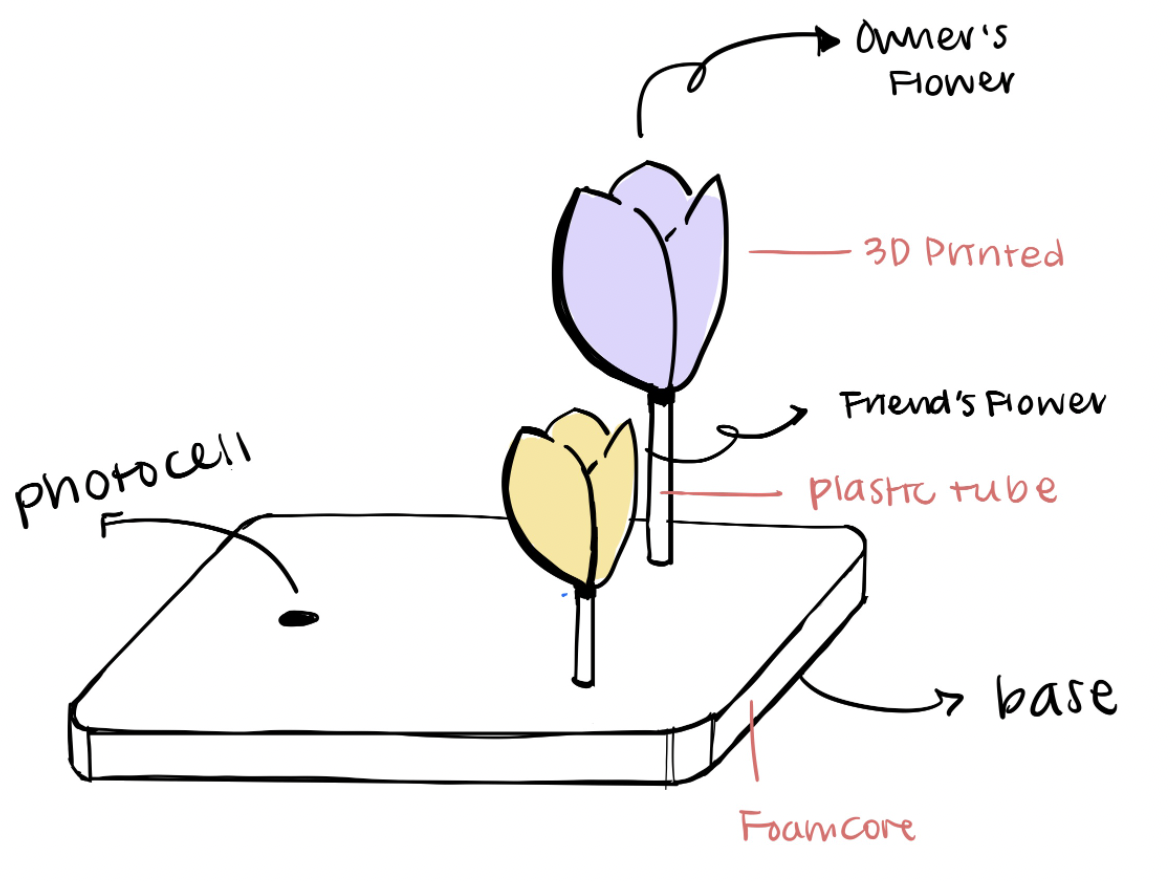 If both friends are focused, two stable lights will be shown on the devices. Seeing their friend focus will motivate the user to stay focused as well. This is hypothesized on the psychology concept of social proof, which says that humans copy other people to emulate expected behavior. 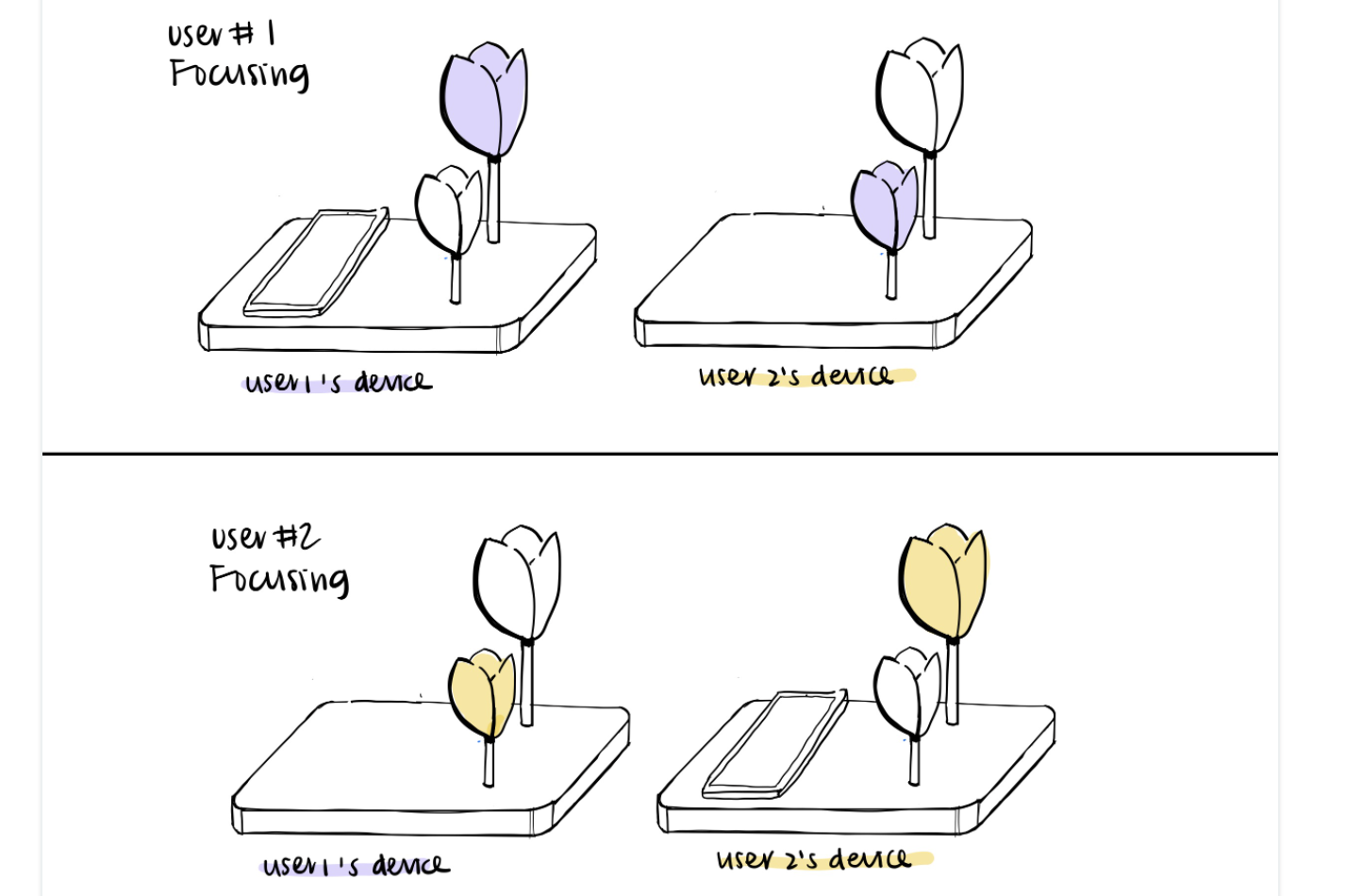 If one friend gets distracted and removes the phone from the platform, their flower on the device begins breathing and also notifies their friend that that they are distracted. 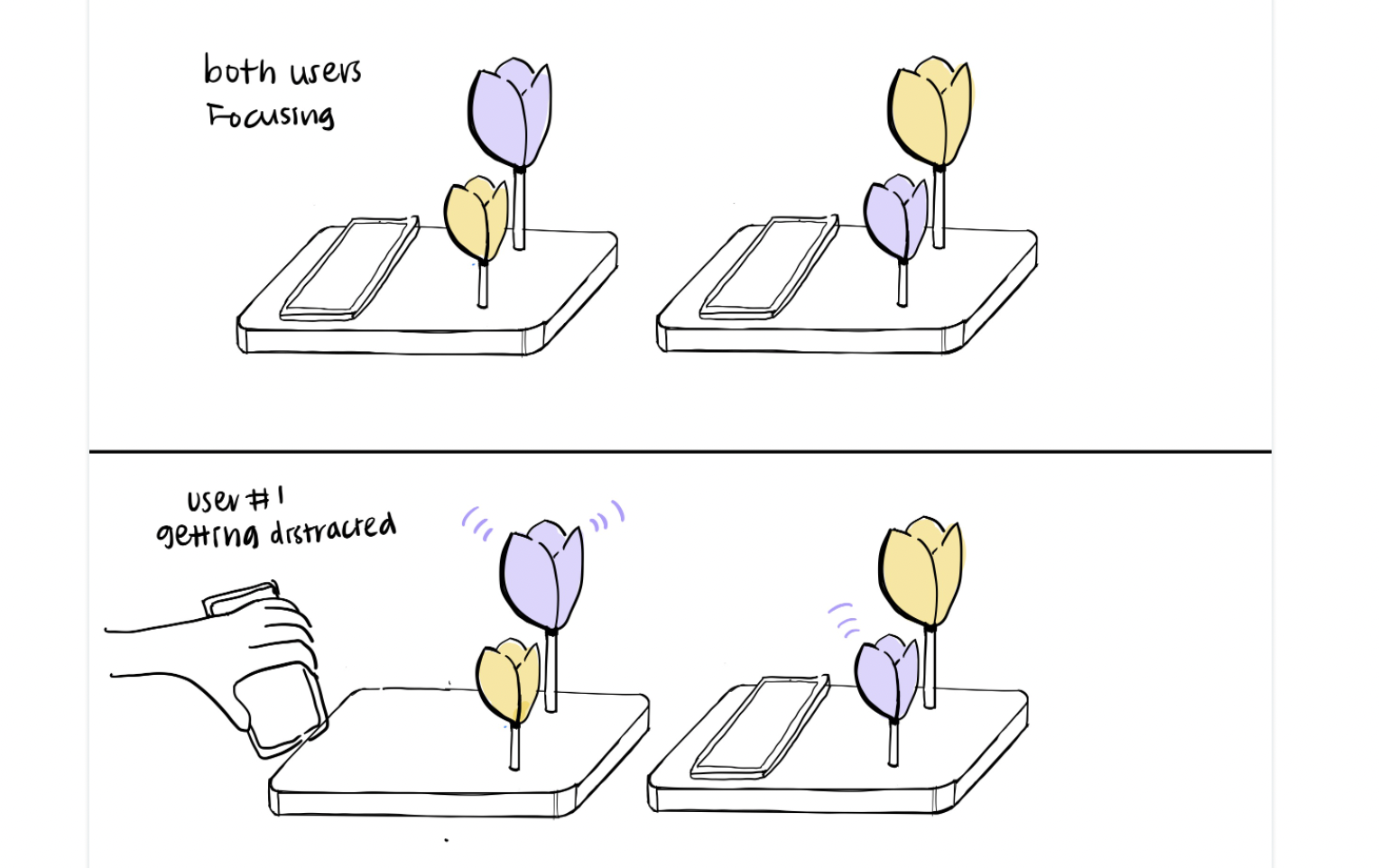 Approach
I took the approach of using calm and ambient technology. I decided on this approach because it was important to me that the device would be unobtrusive, something in the background that could help users be mindful of their distractions.

1. Requires little attention: This device is intended to stay in the background. The lights are not bright, and the form is simple. There is also very little input needed from the user (just turning it on and placing their phone on the platform).

2. Makes use of peripheral vision: The lights on the roses breathe slowly so that it would catch their attention but will not be intrusive or invasive. The breathing light is designed to be just bright and blinking fast enough to be noticeable and glanceable by the user.

3. Affective design: We believe that our product will help replicate the joy of working alongside a friend. It will connect two friends so that they are keep each other productive and less distracted. The form itself is oftentimes used as a symbol of productivity and growth.

4. Simplicity: I wanted to make sure this device has a very niche purpose, as opposed to being a complicated device. It should be embedded into their routine, but not too demanding or difficult to learn.

Create something simple, and do it well 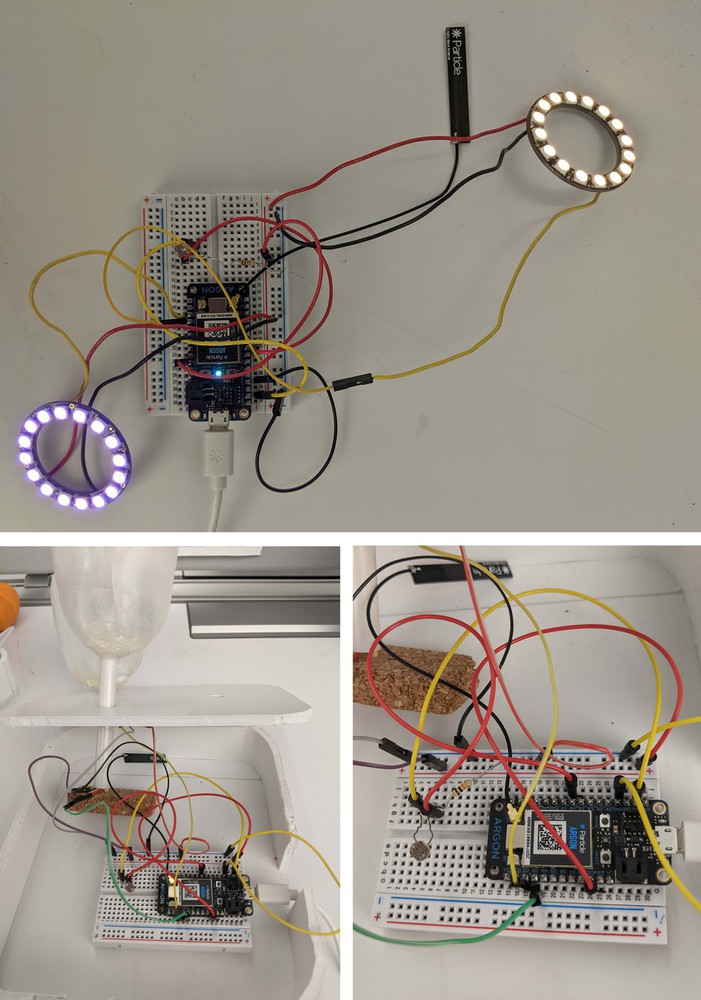 I knew we only had about 2 weeks to build the functional prototype. This project taught me that even if you are working on something relatively simple - perhaps a single feature - it is most important to do it well. I wanted to stay true to our design concept and deliver a working prototype that would bring the concept to life. Quality over quantity any day.

I made the decision to only 3D print the tangible form of one of the devices in the paired set. This would allow our audience to see our MVP and would save our time/resources. 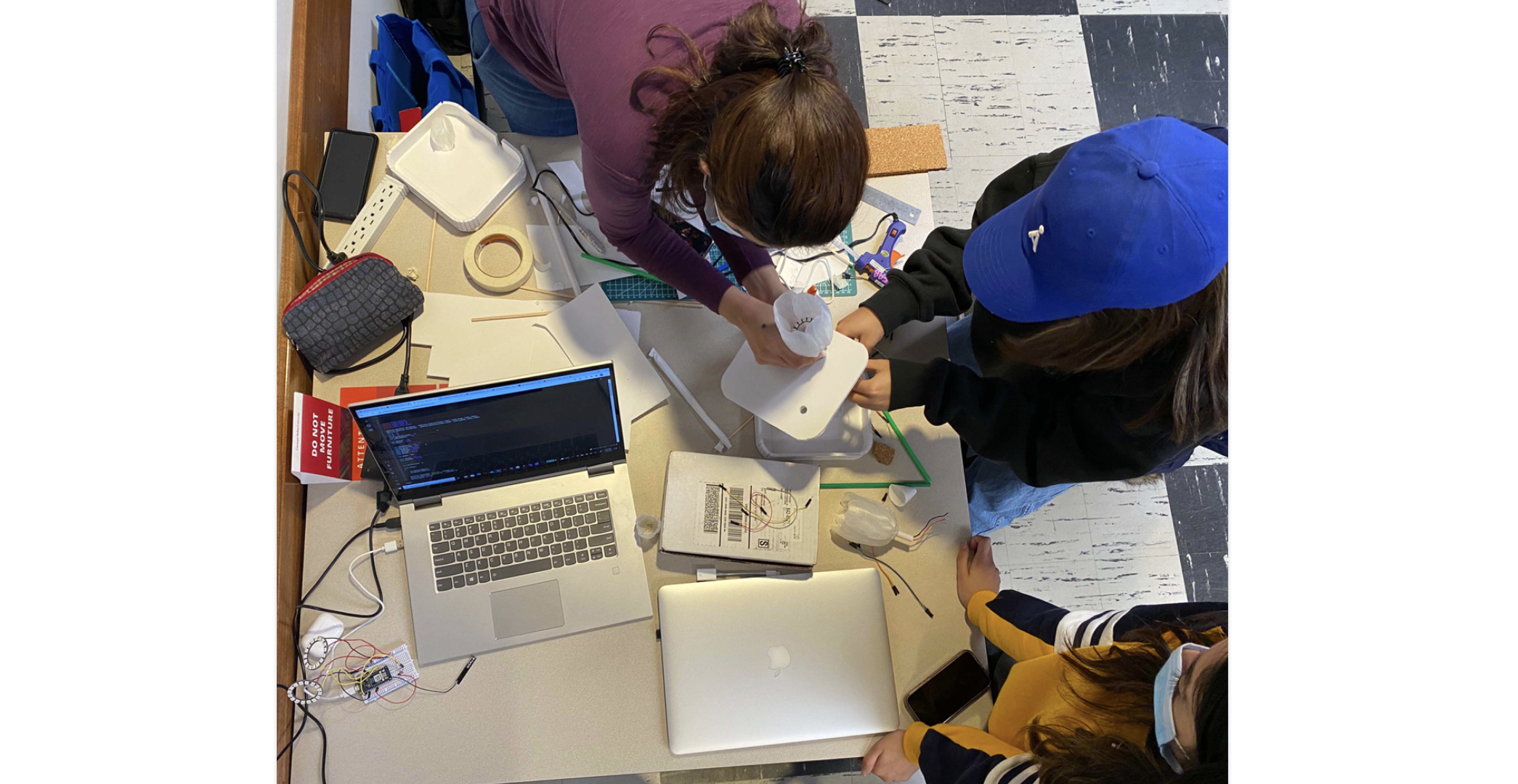 Final Demo
Next Steps
During our pitch, we received very positive comments and great constructive criticism. If I were to move forward in developing this product, I would do the following:

1. Give the product added tangible utility by giving the physical form phone-charging capabilities.

2. Design a more sophisticated tangible form that makes it purposefully more difficult for users to access their phone. This type of purposeful design would help users to get less distracted by their mobile device.


3. Analyze the user flow further to alleviate any additional actions required by the user, such as turning the device on/off. The goal is for the IoT product to be very gracefully embedded into a user's routine.

4. Conduct user testing to validate all above design decisions.

Thanks for reading, appreciate your time!
🌸👩🌼👩🏽